I recently decided to switch my site over from Ghost to Wintersmith, a static site generator.

But, Chad, weren’t you just recently raving about how great Ghost was?

Why, yes, Random Internet Person, I was. Please allow me to explain before interrupting.

Ghost’s user experience was the major reason it had such an impact on me. It really does have the nicest writing experience on the web. But when it comes down to it, I guess I found the whole idea of a blog engine in general to be restricting. As a web developer, I want to be able to easily work with pages and HTML and not necessarily be limited by a blog format. In the end, the major thing I really liked about Ghost was the fact that I could write posts in Markdown instead of some horrible WYSIWYG editor.

Why not get the best of both worlds? A framework that allows me to be a web developer but at the same time gives me the ease of use of working with Markdown.

Static site generators have become very popular as of late — Jekyll probably being the most popular since Github Pages uses it. I wanted to use one built on nodeJS though. Because, well… 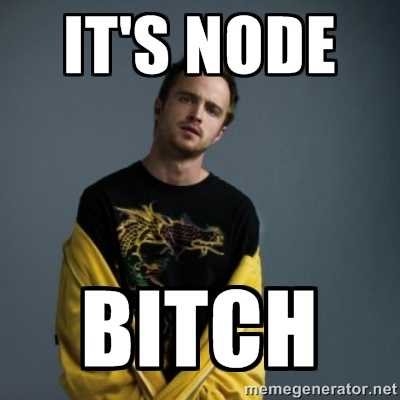 Wintersmith allows you to create content pages in Markdown and have those merged into HTML templates. It supports a number of plugins for different templating engines. The default blog template Wintersmith ships with uses Jade. I quickly switched that to use Handlebars because I don’t hate myself.

With the existing set of plugins out there, you can choose whichever combination of frameworks makes the most sense for you. For a developer, it feels much more empowering to use something like Wintersmith rather than an existing blog platform.

But with Ghost, it was very easy to change the theme of your site. Now you are stuck with whatever you have now.

Bootstrap is my designer-in-a-box. For one that is not “designer-inclined,” Bootstrap allows me to put something decent together pretty quickly. Not to mention there are a wealth of customization options. Also, Bootstrap is a base for web applications, not limited to just blogs. So, when I get the urge to put up more than just a random blog post on my site, I can without much hassle.

For me as a developer, branching with git is very natural. And now that I am managing my site with git, it is very easy to branch off of master if I want to work on a post for a little while without publishing it. I can understand why a non-developer end-user would think I am crazy. But that is why things like Ghost still have a place. I still think it is the best blogging framework around. I just don’t want to use one of those anymore.

Not to mention, Github has some of the best features around for doing things with your repository directly from the browser. It is possible to create a branch, work on it for a little while, and eventually merge it back to master without ever having to clone the repository. Combine this with Github’s Markdown editor with live previews and you got yourself a winner.

But now you have a build step for your blog. You will have to build your static site and push it to a hosting provider everytime you want to publish a post. That sounds like a pain in the ass.

Wercker to the Rescue

Wercker is a hosted CI service that allows you to give it a build/deployment script that will automatically run everytime you push a change to a branch it is watching.

I have dealt with my fair share of CI servers in the past, Teamcity the one I am most familiar with. Wercker, compared to them, is much easier to get setup and running. I really like the fact that they are a hosted service — nothing I have to install and run locally. The concept of running your build on preconfigured boxes is also appealing in that it avoids problems with different environment setups.

Why not Github Pages?

This site has been through a number of frameworks — BlogEngine.net, Wordpress, Ghost, and now Wintersmith. I have a lot of old “permanent” links that have changed and that I maintain 301 redirects for. Github Pages doesn’t support redirects without some not-so-nice hacks.

Here is a quick rundown of how to get Wercker up and running publishing to Azure:

The Wercker UI is very intuitive, but if you need more hand-holding, check out Luke’s post.

The first part of the file chooses which box I want to run my build/deployment on. Wercker has a good amount of “official” and community-contributed boxes. For this site, I’m using the wercker/nodejs box. The next part of the file describes the build steps:

The next part of the file describes the steps to deploy my site. It uses an existing azure-ftp-deploy step to cd to the /build folder and then just FTP everything it finds. It uses the protected environment variables FTP_USERNAME, FTP_PASSWORD, and FTP_URL (configured in Wercker) so I don’t have to commit sensitive information in my repo.

Now, whenever I want to make changes to my site, it is just a matter of pushing to my master branch and in a couple of minutes, it is live. I am very happy with my new setup.

If you want to dig deeper into the code that runs all of this, checkout the repo for this site on Github.